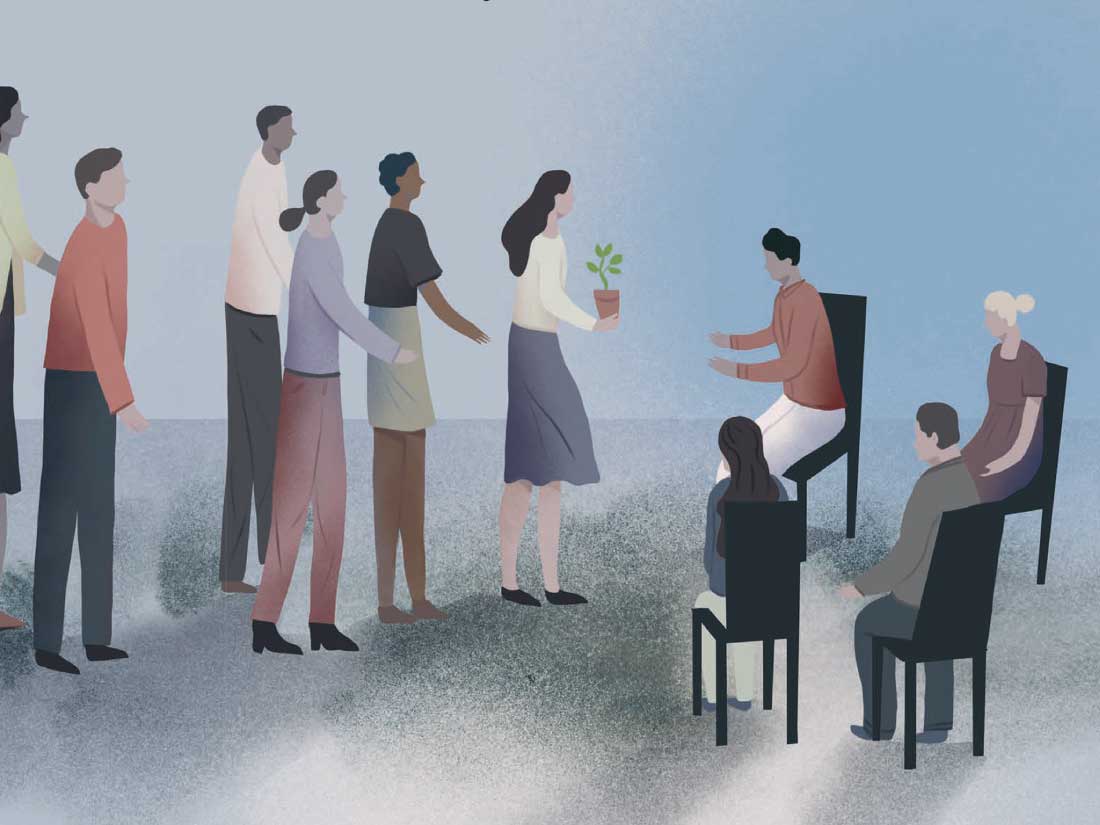 THIS ARTICLE WAS ORIGINALLY PUBLISHED BY BOOKPEOPLE IN AUSTIN, TEXAS

Austin, Texas based author Chris Barton has written over 15 books, with a strong emphasis on emotionally nuanced, meticulously researched nonfiction. In his upcoming release from Lerner Books, All of a Sudden and Forever: Help and Healing After the Oklahoma City Bombing, he tackles the aftermath of a terrible tragedy with sensitivity and hope.

The book, to be published just weeks before the 25th anniversary of the 1995 bombing, has already received stars from both Kirkus and School Library Journal, with SLJ’s review noting that ” Books that help elementary-age children understand disasters are more necessary than ever, so it is helpful to find such a sensitively written and thoughtfully illustrated resource.” The Kids Book Specialists at BookPeople in Austin recently spoke with him to learn a bit more about his approach to tackling this difficult yet hopeful story for children.

BOOKPEOPLE: You are an established voice in the world of nonfiction books for young readers. How was the story of the Oklahoma City bombing different from others you’ve covered?

CHRIS BARTON: Well, I’ve written about Reconstruction, about daylight fluorescence, about camouflage on ships during World War I, and about the choreography of The Nutcracker, but this was my first book where, when I would tell people what subject I was researching and writing about, they’d routinely say, “That’s not a picture book, is it?” And so it’s the first book of mine where I’ve had to get into the habit of providing a disclaimer of what this book is not. I tell them that All of a Sudden and Forever isn’t so much about the bombing itself — the perpetrators are never named — as it is about recovery from and memorialization of a tragedy, and how people move forward from something like that.

BP: This is included in the Author’s Note at the end of the book, but could you talk a little bit about how you came upon this story and why you wanted to tell it?

CB: The 1995 bombing is one of those events where people vividly remember where they were when they heard the news. I was at an office park in Atlanta, at my first job out of college, and so I’d been aware of the story for nearly my entire adult life. Aware, but not all that well-informed — especially once the story left the front pages in the cities where I lived.

That changed in early 2016 when I was in Oklahoma City visiting schools as part of a book tour. On my last day in town, right before I went to the airport, I stopped by the Memorial to see the Field of Empty Chairs. It was my first time there. And until that day, I did not know that it was the Oklahoma City National Memorial and Museum.

There was so much more to the Memorial, and such a moving, gripping story told by it and by the Museum, that afterwards I couldn’t stop thinking about the bombing and about the paths that lay ahead for those whose lives were changed by it.

When I can’t stop thinking about a story, I write it. Or at least start looking into the possibility.

BP: Did anything you heard or learned in your research surprise you or especially move you? At what point in the process did you know for sure that this was a book you were going to write?

CB: As I began digging into the many, many newspaper and magazine articles, television transcripts, books, documentaries, etc., about the bombing, I was particularly struck by the connections among people, and by the emotion and complexity of those connections. I was struck by the recipients of organs donated by a first responder who died after being injured at the scene. By the daughter of a victim and the first responder who met on their way to a trial and later married. By the father of a victim and the father of a bomber who became close. By the comfort and support that those affected by the Oklahoma City bombing provided in and around New York within days of 9/11.

In June of 2016, I mentioned my idea for a book to my editor at Lerner Publishing, Carol Hinz. There’s no editor that I trust more, or feel more trusted by. She replied, “I’m intrigued. … I think there’s something to this. … Let’s keep talking.”

It was another year before our continued talking resulted in book proposal for Lerner as a whole to say yes to, and once they were on board, they were completely on board. There was trust all around. They have been so supportive of this book.

BP: You talk about all the conversations you had with survivors, first responders, and family members. Did you find most people wanted to share their stories?

CB: No, I can’t say that most did. In general, I found survivors and first responders to be more likely to want to talk to me, but it wasn’t universal. And there were many victims’ family members who never responded to my inquiries — the inquiries of a stranger two decades after the worst time in their lives — or who simply weren’t interested in talking with me.

But I felt an obligation, in my writing, to honor what I had learned of their stories, to be true to the widest possible range of experiences of those affected by the bombing, regardless of whether they spoke with me or not.

BP: What were the biggest challenges in telling this story? What was most important to you to convey to readers?

CB: One challenge was making sure that all of us who were most directly involved in creating this book had a true sense of the significance of the story we were telling, and no one shied away from that.

Illustrator Nicole Xu’s beautiful art was informed by her visit to the Memorial and Museum. I made my third visit there last April, for the Remembrance Ceremony on the 24th anniversary of the bombing. Carol, my editor, was there, too, as was the book’s art director, Danielle Carnito. That investment of time and emotional involvement is unprecedented in my book-making experience.

The single biggest challenge in the telling itself was emotional honesty. This is a story about grief and about hope and our inability to entirely avoid tragedy and our capacity to help each other through.

There’s nothing quick or easy or simple about any of this — which many children already know because of events in their own lives or communities, so All of a Sudden and Forever serves to affirm what they may already be feeling. I believe there’s comfort in that.

And for those who so far have experienced tragedy or disaster or grief only from a distance, an honest depiction of what those affected may be going through can make for more empathetic readers who are better prepared and equipped to help when they’re called upon.

BP: Did you know you wanted to build the book around the Survivor Tree right away, or did that come later as you collected stories from others?

CB: That came later. I knew I wanted to focus on people, and for a long while I was concerned that an emphasis on the tree might be at odds with that, and might even be a way of avoiding the emotional complexity of the human side of the story. But I came to see the tree as a metaphor for that complexity, and as a way of representing the life cycle of those emotions and the stories we tell to keep our memories alive. The more that happened, the more central the Survivor Tree became to this book.

BP: You write that seedlings from the Survivor Tree have been planted near and far. Where are some of those trees now? How far have they spread?

CB: Seedlings or saplings have gone to Fremont, Ohio. Joplin, Missouri. Killeen, Texas. Roosevelt Island, New York. I know there were plans to plant one in Newtown, Connecticut, in 2013.

I have one in a pot on my back porch that I hope to transfer into a permanent home this year or next. I’m looking forward to seeing its leaves return this spring.

BP: The last thing you leave readers with is a Recommended Reading List. There are books here that tell stories of tragedy and loss, of heroism and compassion, and others that tell stories of connection and hope. How did you put together this list, and how would you hope it is used?

One way to do that was with the Recommended Reading. I knew what the book’s themes were, and I sought out books on those themes, or included books that I was already familiar with, such as Maira Kalman’s Fireboat and Liz Garton Scanlon and Marla Frazee’s All the World.

The global WorldCat library database was an essential tool not only for researching and identifying books that fit with those themes, but also for determining how widely available those books are. It doesn’t do readers much good if I recommend a book that only a handful of libraries in their state have in circulation or which their bookstore might have a hard time obtaining for them.

BP: Sadly, we live in a world in which terrible things happen much more frequently than they should. What is your goal in writing this book for kids now? What do you hope readers take away?

When something terrible happens — whether it’s a private family loss or a tragedy on a global scale or something in between — and a child is directly affected or is concerned on behalf of others, I want them to understand that life continues. It continues differently, but it goes on.

And for examples of how it goes on, of how we may react and respond and help each other along the way, there’s no better story than that of the people whose lives were forever changed by the Oklahoma City bombing.

All of a Sudden and Forever by Chris Barton goes on sale February 4, 2020. CLICK HERE TO LEARN MORE ABOUT THE BOOK